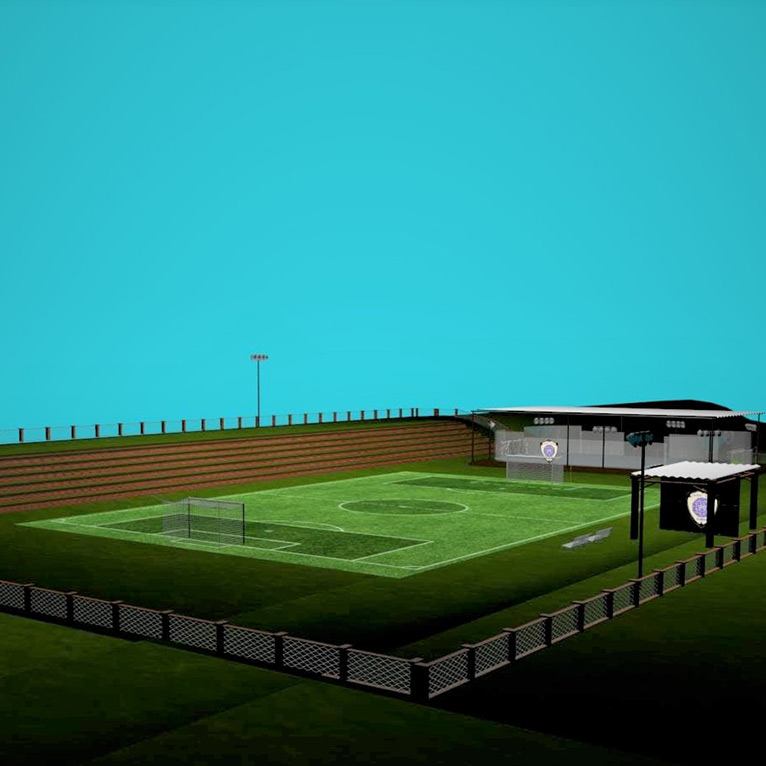 Central Texas Lobos of the Gulf Coast Premier Soccer League (GCPL) announced today that they have secured a site location and are now one step closer to their dream, and that of every lower league soccer club, to own and operate a soccer specific stadium.

The new facility will be located on a 4-acre site in South Austin, near the junction of Interstate 35 and Highway 71. Construction is projected to begin later this year and be ready for the 2020 Gulf Coast Premier League season in the Spring of 2020. The land acquisition was made possible through private investment and a donation by the Heidi Search Center, a non-profit resource for families and communities that assists with search efforts for missing children and adults and also offers prevention programs.

The Lobos are now in the second stage of stadium development-securing the financing necessary to start construction. The current overall site plan will consist of a regulation sized soccer field, an artificial turf mini-field, dressing rooms and concession stands. The stadium will be an environmentally-friendly facility, incorporating green policies and protocols. Outdoor amphitheater seating with a capacity of approximately 700 will be available for future outdoor games.

David Walding, Central Texas Lobos Owner and President, stated, “This facility is a vital step for the growth and stability of the club, and will provide a great community benefit to the under-served residents of South Austin and nearby Hays County. We felt that a proprietary facility was the only way that we could grow the sport through youth development, consistent with our philosophy of inclusion of all residents regardless of background and economic resources. It will also help us continue to address requests from Lobos fans for a better game-day experience.”

The club has established a partnership with Unite The Game (UTG) Foundation, a New Orleans based non-profit, that specializes in helping communities develop soccer facilities in urban areas. UTG works to remove the barriers to soccer participation, connect the game in any given area, and fill in gaps where it makes sense. After Hurricane Katrina, UTG played a key role in helping the New Orleans soccer community identify and implement comprehensive solutions to rebuild soccer facilities destroyed or damaged by Hurricane Katrina.

Grant Guthrie, CEO of UTG, is excited to begin working with the Lobos. “With the explosive growth of both the City and soccer in Austin, we are excited to be working with David and his focus on outreach through soccer to the inner city. Austin has the perfect culture and mindset to successfully implement this outreach model.”

Walding discussed how the mini-pitch, which will be available to the community, is a key component to creating opportunities for residents in the nearby South Austin neighborhoods. “We are pursuing options to ultimately include a mini-pitch at the facility, which is vital to our vision. The residents near our stadium location desperately need a place for inexpensive access to soccer, one that is unaffected by overuse, drought, flooding, lack of lighting, and other barriers we have identified in this neighborhood. We look forward to working with prospective investors, schools, and residents to address these issues for the youth we will serve.”

The Lobos will begin their second year in the Southeastern regional Gulf Coast Premier League this May. The club currently plays its matches at Bob Shelton Stadium, a Hays County School District facility in Buda-a South Austin suburb. The GCPL plays a summer schedule that will run through the end of July 2019. Schedule details were released last week and can be found at www.gcplsoccer.com.

The Central Texas Lobos began operations in 2015 but have been an intermittent part of the Austin soccer community, under a different club name, since 1996. Club President David Walding, after moving back to the Austin area from non-profit work in Seattle and Mexico, took over the reins and developed a long-term vision for the entire Lobos organization that is focused on opportunities for all players, regardless of economic resources.

With a nonprofit background working with the Texas immigrant community, and especially unaccompanied minors, in the Austin and Hays County area, Walding saw great potential in connecting soccer with his client base. The sport provides an opportunity for talented players in under-served areas to integrate into the local community. Scholarships and other incentives also provide an opening for these youth to pursue educational opportunities. Those integration and advancement dreams are currently few and far between in a domestic soccer landscape where gifted athletes in mostly African American and Latino neighborhoods, including immigrant youth, are left behind.

Walding talked about why the new facility is key to greater access for soccer players in the local communities they serve. “It has been nearly impossible for our club to create a sustainable model outside of the ‘pay-to-play’ system without our own facility. This facility will help solve that problem, and simultaneously provide a sense of community, pride, identity, and other tangible benefits to our South Austin residents.”

The Lobos club structure now includes a youth academy, an arena soccer team (ArenaWolves) that plays in a regional league, and also operates a club (Academy Paraiso) that is part of the third division in Honduras.

Controlling your own facility is a key to running a successful soccer club
at any level. Early in the league’s development, Major League Soccer (MLS) identified that soccer specific stadiums were critical to the long-term health (and likely survival) of professional soccer in the U.S. The second division United Soccer League (USL) has also embraced the same philosophy for similar economic reasons. The fact that two Austin professional soccer expansion teams, MLS’s Austin FC and USL’s Austin Bold, are building soccer specific stadiums is testament to the power of this model in those leagues.

The same facility economic realities, on a smaller scale, also face lower division soccer clubs. As an example, tech entrepreneur Dennis Crowley, who operates a National Premier Soccer League (NPSL) club in New York, wrote a series of posts on the startup of his club a few years ago. In this detailed discussion he identified fields as the key driver of expenses for his club and asked for outside help to address the issue:

“Last year, fields were our singlegreatest expense ($16,250). This year, fields will be our single greatestexpense. The long-term play here has to be that we find our own practicefacility that can used by our first team, our reserve team, and our youthacademy teams. If anyone has any ideas, leads, or suggestions on how to do thisin the mid-Hudson Valley area, please reach out”.

Of course, expense is not the only benefit for a soccer team to own and control their stadium. In the Lobos case the community benefits will provide a deep and enduring connection to the community, helping to realize their long-term vision. With the site location in place, the Lobos are well on their way to making these dreams a reality.